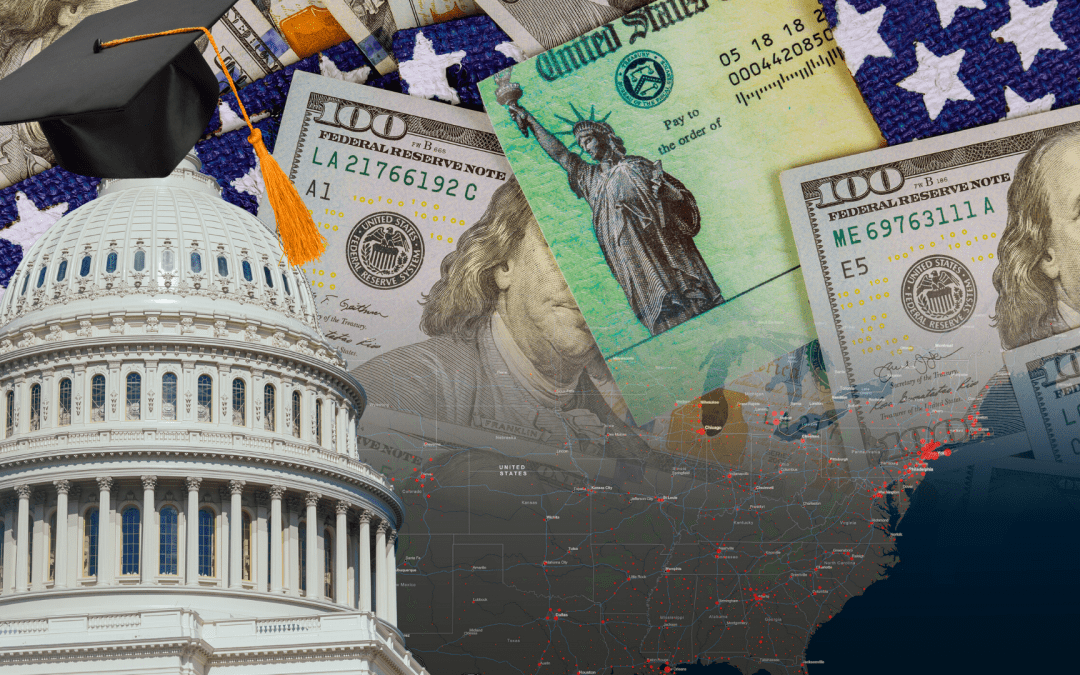 The letter applauds lawmakers for swiftly passing the CARES Act, which suspended federal student loan payments for 80% of student borrowers. However, the letter notes that the suspension still left out 1 in 5 student borrowers who owed on commercially-held FFEL loans or Perkins loans. Now the coalition of organizations calls on congress to address the student debt crisis more broadly in the next Coronavirus package. Specifically, they request federal student debt cancellation for the “hardest hit” borrowers and extending the suspension of student loan payments until March 2021 for those borrowers who will have to continue making payments. “Canceling student debt would ensure that borrowers are able to shoulder the ongoing costs of food, supplies, and medications if they, like many workers, face layoffs or smaller paychecks (due to reduced hours or slower business) because of the pandemic. [2]”

Student loan debt has been a crisis since long before COVID-19. Before we were swept by a global pandemic, outstanding student loan debt had reached $1.6 trillion and over 9 million borrowers were in default on their federal student loans. According to the Student Borrower Protection Center, a new borrower goes in to default every 26 seconds [3].

The letter paints a bleak economic future, predicting 30% unemployment rates in the second quarter, a 24% drop in GDP, and a contraction in the world economy by 1%. For perspective, that’s a greater contraction than the one that followed the 2008 financial crisis. The letter claims student borrowers will be hit the hardest by this economic fallout, who are already struggling to cover basic necessities like food, rent and medical care. It goes on to say the women and communities of color bear the brunt of the burden. “Black students must borrow at higher rates and in larger amounts due to racial inequities in incomes and wealth. Additionally, women hold two-thirds of the country’s student debt and on average borrow $3,000 more than men to attend college—yet because of the wealth and wage gap, women find it harder to repay their loans.[4]” Even more shocking is the revelation that more than three million Americans over the age of 60 are still laden with student debt. “More than 40,000 people over 65 have their Social Security payments, tax refunds, or other government payments offset or garnished because they have fallen behind on their student loan payments. [5]”

According to these organizations, wide scale student debt cancellation would benefit 43 million Americans, increase GDP by up to $108 billion each year, add 1.5 million jobs per year, and increase borrowers’ incomes by about $3,000 over a 3-year period [6].

While Republican lawmakers and the Trump administration have implied they are open to a second stimulus package, it’s unlikely we will see another round of relief passed until July at the earliest. Until then, student borrowers will still be anticipating the September deadline when CARES Act is scheduled to expire and federal student loan payments will be due once again.

Here is the Letter That Was Sent to Congress

The 66 undersigned community, civil rights, consumer, and student advocacy organizations thank you for taking swift action to pass the CARES Act to begin to grapple with the ongoing economic fallout caused by the coronavirus. However, much more must be done to ensure that student loan borrowers and the economy recover when this crisis ends. We urge you to include student debt cancellation in the next coronavirus package, and for those who will still have federal student debt, to extend suspension of those payments through March 2021.

We are concerned about the increasingly grim predictions we hear about the state of our economy. Without a comprehensive long-term solution, the CARES Act suspension of federal student loans for eighty percent of borrowers merely kicks the problem down the road to this fall, when jobless claims are predicted to exceed Great Depression-era levels, and the financial crisis will have severely deepened. The president of the Federal Reserve Bank of St. Louis, James Bullard, predicted the U.S. unemployment rate may hit 30% in the second quarter, a level five percent greater than was reached during the Great Depression.[1][2] Goldman Sachs is projecting a record-breaking 24 percent drop in GDP for the second quarter of 2020, and that the world economy is expected to contract by 1 percent this year—which would be a greater worldwide contraction than the one following the 2008 financial crisis.[3] And the downturn is expected to last well beyond this year: Morgan Stanley predicts that GDP in developed markets won’t return to pre-virus levels until the third quarter of 2021.[4]

The student debt relief in the CARES Act fails to address this looming economic crisis. First, the six-month suspension on federally-held federal student loans leaves out an estimated one in five borrowers who owe on commercially-held FFEL loans or Perkins loans. Second, even for the eighty percent of borrowers who benefit from a six-month suspension, many will face the daunting prospect starting in October of choosing between paying for necessities including food, medical care, and rent, or making their student loan payment.

The next stimulus package must take the necessary steps to ensure economic recovery down the line: this means federal student debt cancellation, so the hardest hit don’t struggle, and an extended federal student loan payment suspension that is expanded to all borrowers to at least March 2021, so those who will continue to have payments will have more breathing room to get back on their feet. Without taking these additional steps, the CARES Act sets up millions of federal student loan borrowers to face the daunting prospect of trying to find the means to pay their student loans in the middle of economic devastation.

Canceling federal student debt would bring impactful relief to 43 million Americans and their families.[5] Loan cancellation would provide the greatest benefit to many struggling low-income borrowers who would likely see their debt extinguished.[6] For those who would still have a balance, suspending payments until the end of the year would prevent them from facing yet another financial shock when the CARES Act federal student loan suspension expires in October. An extended payment suspension would enable many economically distressed borrowers to focus on recovering from a once-in-a-lifetime national emergency and free up extra dollars to inject into the economy. It would also strengthen the finances of student loan borrowers and their families over the long term by ensuring that tens of millions of borrowers come out of this crisis with lighter debt burdens.

In response to the COVID-19 pandemic and its devastating economic impact, it is crucially important to include student loan debt cancellation as a part of any economic stimulus. We support the proposals that Senate and House Democrats have put forward to cancel student debt by establishing a program to make principal and interest payments on outstanding federal student loans throughout the duration of this crisis. Such a program would ensure that loan balances go down throughout the duration of the crisis, putting millions of households in a better position to deal with the long-term economic fallout this crisis will create. We also support the Student Debt Emergency Relief Act by Representatives Ayanna Pressley and Ilhan Omar to cancel a minimum of $30,000 in federal student loans.[7]

Canceling student debt would ensure that borrowers are able to shoulder the ongoing costs of food, supplies, and medications if they, like many workers, face layoffs or smaller paychecks (due to reduced hours or slower business) because of the pandemic. And at a time when student loan servicers are shuttering call centers or reducing capacity, student loan cancellation would ensure there is less need for borrowers to take time out of their days to chase down their servicers and try and secure changes to, or help on, their student loans.[8]

Reports show that canceling student debt would also boost the economy for everyone in the medium-to-long term. It would boost GDP by up to $108 billion a year, and add up to 1.5 million jobs per year.[9] Research by the National Bureau of Economic Research shows that federal student debt cancellation increases borrowers’ incomes by about $3,000 over a three-year period.[10]

Even before the COVID-19 pandemic, the United States was facing a student debt crisis: outstanding student debt surpassed $1.6 trillion, over 9 million borrowers were in default on their federal student loans, and another borrower goes into default every 26 seconds.[11] The burden of default falls particularly hard on communities of color.[12] Black students must borrow at higher rates and in larger amounts due to racial inequities in incomes and wealth.[13] Additionally, women hold two-thirds of the country’s student debt and on average borrow $3,000 more than men to attend college—yet because of the wealth and wage gap, women find it harder to repay their loans.[14] Three million Americans over the age of 60 still have student debt. More than 40,000 people over 65 have their Social Security payments, tax refunds, or other government payments offset or garnished because they have fallen behind on their student loan payments.[15] According to a Consumer Financial Protection Bureau (“CFPB”) Snapshot report, older borrowers are more likely than those without outstanding student loans to report that they have skipped necessary health care needs such as prescription medicines, doctors’ visits, and dental care because they could not afford it.[16]

Now more than ever, we must ensure that all people prioritize their health and economic wellbeing and that of their families and neighbors. Federal student debt cancellation is an essential factor in making that possible, and we strongly urge you to include this relief in the next COVID-19 package.