Joe Biden as President: What Does It Mean for Your Student Loans… 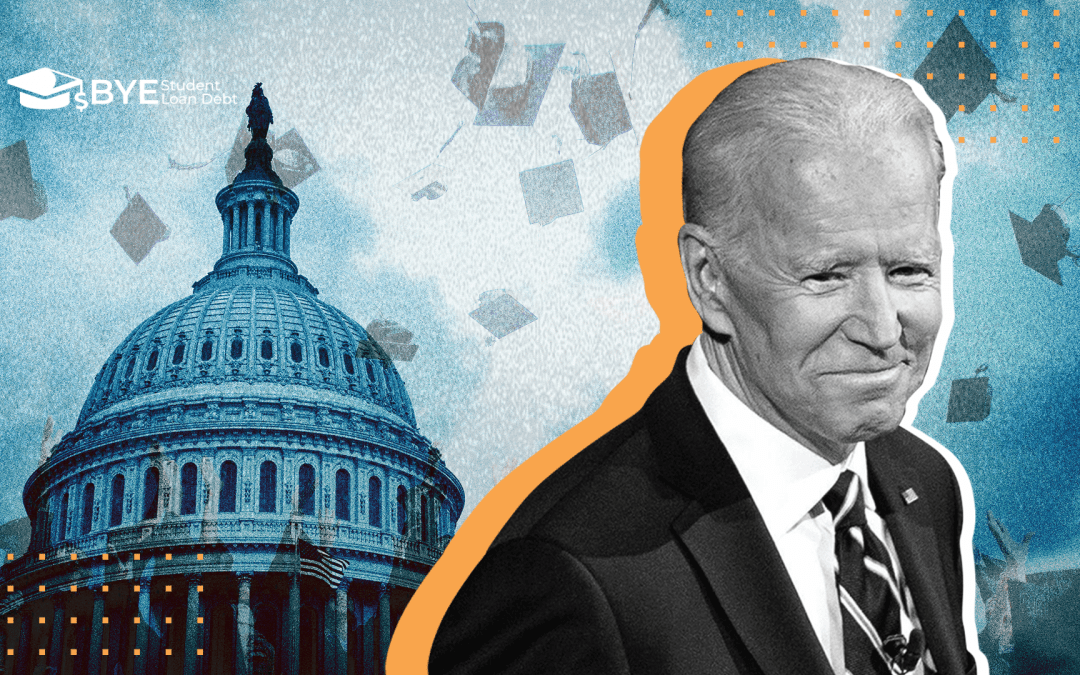 After a long, drawn out election Joe Biden has officially been declared the next president of the United States. Along side him, Kamala Harris will serve as the first female vice president and the first woman VP of color. Together, Biden and Harris have a vision for higher education that includes big changes for student loans. Back in July, Bye Student Loan Debt took a look at how Biden planned to tackle the student loan crisis. Four months later, we’re revisiting Biden’s student debt proposals to see what, if anything has changed. While nothing is set in stone, let’s take a look at what the Biden administration has in store for student loan borrowers.

President Elect Joe Biden intends to simplify the federal student loan repayment plan. As it stands now, the system is a mess. Repayment plans vary by income earned and each repayment plan has a different term length for repayment, varying from 10 to 30 years. Under the Biden administration, all student borrowers earning more than $25,000 annually will be placed under the same income-driven repayment plan. According to this plan, payments would be 5% of discretionary income (the income left over after paying for such necessities as food and rent) and the repayment term length would be set at 20 years. After 20 years of qualifying payments, the remaining balance would be forgiven. It’s important to note that this forgiven balance would not be considered taxable income.

For borrowers earning $25,000 or less per year, Biden has proposed to cancel their student loan debt altogether. These student borrowers would also be privy to 0% interest rates.

President Elect Joe Biden does not have a comprehensive plan to cancel student debt, unlike many of his democratic running mates during the presidential primaries. He has said that he would cancel up to $10,000 in student loans per borrower in response to the economic devastation of COVID-19. However, this proposal would notably exclude private student loan borrowers.

It’s possible to have federal and private student loans discharged in bankruptcy, but it’s very difficult and costly. Borrowers who can’t afford to pay off their student loans can hardly afford the time and the lawyers to fight them in court. President Elect Joe Biden has proposed an Obama-Biden administration proposal from 2015 which would roll back the 2005 Bankruptcy Abuse Prevention and Consumer Protection Act in congress, an act which prevented private student loans from being discharged in bankruptcy.

Borrowed from a Bernie proposal back in 2017, President Elect Joe Biden has claimed he would make public colleges and universities free for students from families who earn $125,000 or less per year. In his original proposal, Bernie indicated that this would eliminate tuition expenses for 80% of the population.

Biden has also proposed to provide two years of community college for free. These funds would be accessible to anyone, not just high school graduates.

The current Public Service Loan Forgiveness (PSLF) program is burdened with administrative problems left and right. 99% of PSLF applicants are denied every year, making PSLF notoriously difficult to achieve. Much like he intends to simplify student loan repayment, President Elect Joe Biden would like to simplify the PSLF program. Biden proposes $10,000 in in graduate or undergraduate student loan relief every year to borrowers in national or community service, for up to five years. Anyone who works in schools, government or nonprofit organizations will be automatically enrolled.

President Elect Joe Biden and Vice President Elect Kamala Harris have been very vocal about the evils of student loan debt and they have both made it very clear that big changes are due. Our newly elected leaders have every intention of tackling the student debt crisis head on, if they can get their proposals to pass in congress. To stay up to date on higher education in America sign up for our newsletter below. Earn insider access to the latest news, products and services with the click of a button.

Is It Too Good to Be True Though?

While many of the proposals submitted by the incoming administration sound awesome(!) – we do want to take this time to convey that the likelihood of each one of these getting approved is very slim.

Congress has a higher percentage chance of being split between the House and the Senate. This will make it much harder for some of these items to get passed. So we’re hoping that $10k in forgiveness will go through – but the average student loan debt amount is $29k (so – most of you still have $19k to go).

Whether you have $20k or $200k in debt – $10k will only get you halfway (or a mere fraction of the way). Schedule your consultation today to start your journey towards financial freedom!